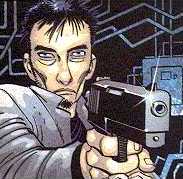 We know almost nothing about Dex. We don't even know if Dex is his real name, a diminutive, or just a nickname. What we do know: Dex was recruited/enslaved by Morlun, probably several years ago, or at least months ago. Dex didn't have free will, he had to obey Morlun's every command (the simplest example, "Why haven't you eaten?", "I'm not hungry", "Eat.", "Ok."). He asked Morlun to kill him at least once, but Morlun refused. After the battle that opposed Spidey to Morlun, Morlun was very weak, and Spidey was left with the dilemma of either killing him or leaving him alive to cause more deaths.

Dex (having stolen a gun from the corpse of a policeman that Morlun killed) presented his official resignation request, shooting Morlun in the chest. Morlun, weakened by the radiation and by the beating Spidey gave him, couldn't resist the wound and died. Spider-Man chased and caught Dex, but Dex said that Morlun hurt him a lot, and Spidey decided to let him go, if he never came back. Dex leaves singing "The witch is dead". We'll probably never see Dex again, unless Morlun is resurrected.