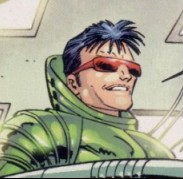 Carlyle was a career criminal. He collected convictions for fraud, forgery, extortion, racketeering and even assault and battery and a bunch of other charges, all under another name. Nexus Industries desperately needed a PR, and they didn't check his background as deep as they should have, so he seemed to be the perfect man for the job. After a few more financial crimes, he was confronted by the company's CEO. He was his first murder.

With the CEO departing on an "unexpected vacation", Carlyle had little time to act, and most of the company's assets were either gone or unreachable. So he thought about power. Having the power to do whatever he wanted to, and being unstoppable. He thought of Doctor Octopus's tentacles.

The best way to beat a self-absorbed genius is through his ego. Carlyle knew this. Lusting for power, he appealed to Doctor Octopus's ego with a fake job offer for Nexus and lured him to a trap. He placed all the company's resources studying Ock's tentacles, and in 5 days they had built him an upgraded set, superior to Ock's because they had the latest generation technology. Leaving Octopus in a die-in-24-hours trap (with a plausible reason, since if anything went wrong he might need to question Ock about the tentacles again), Carlyle left to do a test run on his tentacles, one from which he didn't plan to return unless there was some technical problem.

Of course, Doc Ock didn't die, and he chased Carlyle, who had robbed a bank and was living large in a luxury hotel. The two were joined by Spider-Man, in L.A. to patch up things with his at the time separated wife, and they have an all-out battle, which ends with the hotel collapsing after Carlyle's escape. Doc Ock helps Spidey saving the innocent civilians, but leaves Spidey to die under the rubble. Spidey breaks out, and follows Carlyle to MJ's studio, where he went to find an important hostage. Doc Ock saves Aunt May from him, and Spidey arrives. He and Ock are both outmatched by Carlyle's equipment. But Ock managed to breach Carlyle's armor and told Spidey about it. Spidey flooded the breach with webbing and tore the armor apart, rendering Carlyle harmless. Ock took advantage of the confusion to flee.