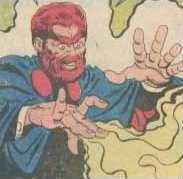 Baron Brimstone first appears at Chem-Solar Corporation where he steals the "highly amplified, solar-fueled microwave transmitter" known as the Sol-Mac which he plans to mass produce and sell for millions of dollars (once he has stolen all the necessary components to build them, of course). He demonstrates apparent mystic powers and has a force field that protects him from Security Guard bullets. (The Baron claims to be a Master of the Mystic Arts but it is never clear just how much magic the Baron knows.) He is also capable of teleporting from place to place but this turns out to be a power derived from a device he wears on his back under his cape.

In an attempt to further his schemes, he puts together "the Satan Squad", composed of Hammer Harrison (a former strong-man who wears big blocks of concrete on his fists), Snake Marston ("the world's greatest contortionist") and assorted hoodlums. He is opposed by Duke Dawson, a crook who doesn't like the Baron horning in on his territory. Duke is, unfortunately, quickly snuffed out by Snake Marston. In the attack on the Chem-Solar Corporation, Machine Man opposes Baron Brimstone. The Baron defeats him by turning the Sol-Mac machine on the Living Robot, as the microwaves scramble MM's internal system. Machine Man successfully fights back by coating his innards with gold. He sends the Baron and his Squad off to jail.

The Baron goes underground for a while after that. He is next seen at the Island Resort of Utopia Cay, going by the name of Baron Walther Theodoric and hanging out with heiress Tinky Weissman, who is an old friend of Janet Van Dyne a.k.a., the Wasp. Janet is on vacation at the resort and she hooks up with a man calling himself Paul Denning. They are both invited to a party on the Baron's yacht but Paul begs off so Jan assumes her Wasp guise and snoops into his hotel room. There she finds a gun case and pictures of the Baron and she jumps to the conclusion that Paul is a hitman hired to kill the Baron.

She races out to the yacht in time to hitch a ride with the teleporting Baron Brimstone and his mob, who are using the party as an alibi while they go to the cashier's office of the casino and pick up some ready cash. Unfortunately for the Baron, Paul Denning, who is actually the mercenary known as Paladin, is hiding in the bank vault. Paladin and the Wasp put the Baron's teleporting "micro-electronic harness" out of commission and that's pretty much the end of that.

Except for one panel in the Fantastic Four where the Baron is reduced to being thumped along with a number of other villains in such a casual manner that we aren't even told how it is done. Suffice it to say, the Baron has been reduced to has-been status and may very well be stuck in the joint for the rest of his days.