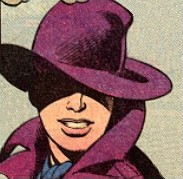 Narda Ravanna was co-owner of Europe-based Vaughn-Pope Fashion with her sister Desiree Vaughn-Pope who inherited the business from her second husband. While Desiree handled business and designs, Narda supervised the cosmetics labs. The business became so successful that unscrupulous fashion designer Roderick Kingsley tried to buy the sisters out. When they refused to sell, Kingsley bribed a former model from the company to claim she received a severe skin disorder from using Vaughn-Pope cosmetics. The case never went to court but the bad publicity ruined Vaughn-Pope Fashions.

The two sisters moved to the United States to try to start over but Narda could neither forgive nor forget Roderick Kingsley. She decided to get her revenge by creating a belladonna-derived gas that would disorient and poison its victims. She then assumed the guise of Belladonna, hired three gunmen named Manny, Moe, and Jack, and went after Roderick Kingsley.

In order to produce her gas, however, Belladonna needed a large supply of neo-atropine. She obtained this chemical by sending her men to steal it from Empire State University. Unfortunately for her, Peter Parker was present at the robbery and this put Spider-Man on her trail. Although terrified by the web-slinger, Narda manages to use her belladonna gas to keep him off-balance. She fails in her attempts at revenge against Kingsley but does escape capture.

In the name of revenge, Narda is willing to commit robbery and attempt murder. Eventually, she goes so far as to ally herself with Prowler II and then double-cross him by trapping him along with Spider-Man in a death trap. When this scheme fails, Narda tries to manipulate events so that Roderick Kingsley will murder Spider-Man and then be arrested for it. Again, she fails and all the plots come back to haunt her when the double-crossed Prowler comes to her seeking his own revenge. Spider-Man steps in, however, and leaves the Prowler, Manny, Moe, Jack, and Belladonna webbed up for the police.