Spider-Man: The Musical... Back on Track?

It's nearly here! It's nearly here! Well, almost. Still, after a troubled year or two, signs seem to indicate that "Spider-Man: The Musical" may well finally hit the Broadway stage after only a couple of years of work. Remember, the Spider-Man Movie took more like a couple of decades... so we should probably not be too harsh in our judgment.

First up, the stage show has a name. "Spider-Man, Turn Off The Dark". But what does it mean... and what will we call it for short? Think "Les Mis", "Saigon". So... "Spider-Man, Turn-Off". Hmm... is that such a positive choice? And why not at least hint at the villain? Give us something to hang onto here, why don'tcha?

According to the news from IMDB on 9th November 2009, the show has just acquired a male lead, and a new producer. Apparently the show's original record-breaking $35m budget has now climbed to an estimated $50m. Wow. That's a lot of cash for a show with a no-name male lead!

The female lead (Mary-Jane naturally) was named as Evan Rachel Wood back in June. She's also a talented musician, who is also a black-belt in karate, as well as being a total hottie.

Music is by Bono and The Edge (of U2 fame, need I say). It's not completely clear how much of the music they are contributing. Original reports seemed to suggest that they were contributing only the main song. However recent credits would imply they have a much larger role, with the official Marvel site giving them the only credit for "Music and Lyrics". Perhaps that's where a lot of the cash has gone.

Anyhow, the producers would have us believe that the show is now back on track. Tickets are available from Barry's Tickets with preview shows as early as January 23rd 2010, and the official opening night still indicated as February 25th, as promised. You can book with confidence. The team at Barry's Tickets assure me that in the (hopefully unlikely) event of any cancellation, all ticket purchases will be refunded in full. 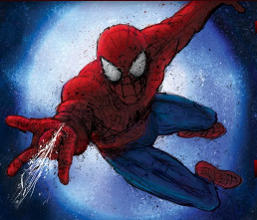 Item: Spider-Man: The Musical... Back on Track?
Items: All News