I went to see if I could find any info on this spidey coloring book from when I was young.

You have it listed but dont have any images.

This coloring book is one of my favorite Spider-Man collectibles. It is both unique, interesting, and rare.

It has a most unusual format, being 17" wide and 7" tall, i.e. very long and skinny. It is one of eight different over-sized coloring books produced by Parkes Run in the late 70's and early 80's. All of the others are three times taller, i.e. 17" x 22". This is the only one of that series which uses the truncated format.

You're quite right, I haven't scanned that book yet. I long-ago covered all of the other books in that title, but I had left this one to last. So let's rectify that right now. Here are scans and a long-overdue review:

All of these Parkes Run large-format coloring books are hard-to-find in mint condition, and this one is no exception. A clean, bright, unmarked copy will easily fetch $100 or more on eBay.

I myself am in the market to buy a mint-condition example to replace my somewhat faded and marked edition, if anybody out there has a high-grade copy for sale, please do Mail Me!

I am a high school teacher in Colorado. I may be crazy, but.... I swear that I have seen Dr. Connors portrayed as an African American man. I believe that it was on the cartoon series or on an X-men cartoon series crossover. If this isn't so, I am truly losing my mind (which could be entirely possible)! If I am wrong I will not admit it to my students of course.

Oh dear. And how long have you been suffering from these delusions?

We really do need to get you into therapy immediately. Let me see, we can fit you in tomorrow afternoon with Doctor Octavius... I'll book you in for a one-hour session. Doctor Octavius is such a lovely Hispanic gentleman, you really will like him.

When I tried to visit the site recently, I navigated to the HTTPS version of the site, which I think I must have done before, since that was in my history. I got a security warning.

I can still use the site just fine by removing the 's' from http, so this may not be any kind of a concern at all. I just thought I would drop a line and see if this is something of which you were unaware.

Actually, the warning is because the certificate offered by the web-server is a certificate for "comicboards.com" which is running alongside "spiderfan.org" on the same server.

This was something I always meant to get fixed-up but never did.

The good news is that we have finally resolved this. SpiderFan is now a fully HTTPS site with a proper certificate, and all non-encrypted HTTP requests will be redirected to HTTPS.

You see! Government-mandated lock-down is good for something after all!

Read an article online where they look at which superhero would be the best guarantor for a loan and they give everyone a score and spidey is coming 5th, behind iron man & thor yet the site says that its not just about money.

If we ignore money then surely he's a far better person to choose as hes trust worthy, honest etc. I reckon that outweighs the fact he doesn't earn much money don't you think? I think in that situation spidey would work an extra job to pay off the loan for you if you couldn't.

Peter "always-late-for-a-date" Parker? That broke-ass, can't even save his girlfriend falling off a bridge guy? The only thing that welcher has going for him is that his secret identity makes it hard for anybody to serve a summons on him.

Did you ever wonder where the [[Spider-Mobile]] went to? The repo man took it!

Recently I went through a photo album from when I was in Vietnam, April '68 - May '69. In there was a "No Prize" envelope. I remember getting it for a letter I wrote to Spiderman. However I have just gone through your very thorough issue reviews for 1967, 68 (69's don't seem to be available) but couldn't find any reference for my letter. I had a copy of the issue but my wife threw it out long ago. Can you help me find the right issue?

I can't believe how complete your reviews are so I'm guessing it's in there but I missed it.

I don't know what to tell you. I can't find your letter to Spider-Man and I have checked all issues from 1967 through 1970. Did you have a different name back then? There is a letter from Will Weisert of Jesup, Iowa in Amazing Spider-Man #69, Is that you?

I expanded my search to include 1966 but still didn't find your letter. All of the major Marvel comics had letter pages back then...Fantastic Four, Thor, and so on...so you may have written to another series. But if you had the comic and you remember it as Spider-Man, well, again, I don't know what to tell you.

As you noted, I haven't done 1969 yet in my From The Beginning series. I'll keep a lookout for your name as I go through. I didn't see it in my search, but I could have missed it. It's been known to happen.

The Electric Company Spider-Man certainly did know what to say in the most awkward situations! 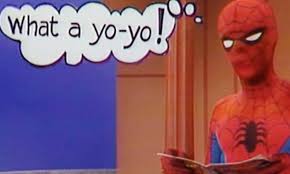 And that's us for another week. Thanks you all for writing.

Or at least, thanks to most of you!