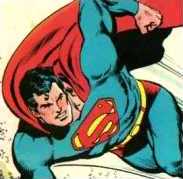 Spider-Man and Superman have met twice to date, the first time to battle Dr. Octopus and Lex Luther in a Marvel Treasury Edition entitled Superman vs. The Amazing Spider-Man. The story was named "The Battle of the Century!".

They subsequently joined forces to defeat the combined might of Dr. Doom and Parasite in Marvel Treasury Edition #28.