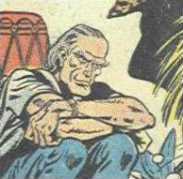 The Man known only as the Sorcerer possessed natural abilities to exert his will over others. Whether he originally possessed this power as a result of genetic mutation, research and training, or other means is unrevealed. He was once one of the world's greatest experts on psychic research and spent every waking hour conductin experiments in ESP (Extra-Sensory Perception).

However, he realized that his own abilities were weak and untrained, and sought further discipline under a guru. He briefly entertained the idea of locating the Ancient One, but decided against it because it would take too much time to find him. After learning all he could through reading and research, he traveled to India where he was trained in Hindu disciplines. After learning all he could through that method, he traveled to Tibet, where he was trained in Buddhist disciplines, and then on to Dahomey, Africa, where he was trained by a witch doctor in the ritual of juju (described as the art of mentally controlling one's enemy).

Having now achieved full mastery of his psychic powers, he returned to the USA where he designed a "Psycho-Intensifier." The Sorcerer now thought to test his prowess by vanquishing the hero Spider-Man, whom he perceived as the most dangerous man of all. He first caused Spider-Man to suffer from weakness and loss of equilibrium. The Sorcerer then used his juju doll to cause Spider-Man to have an intense migraine headache. Wishing to receive proper credit for his planned defeat of Spider-Man, the Sorcerer then mailed the juju doll to "Spider-Man, General Delivery, New York." He realized that eventually the box would be opened by the police, and the world would learn who it was that had defeated Spider-Man.

The Sorcerer then used his Psycho-Intensifier to cause Spider-Man (as Peter Parker) to book a flight to New Orleans. Shortly after arriving, Spider-Man was directed to a warehouse, where he was attacked by the Synthetic Man, into whom the Sorcerer was projecting his mind. Spider-Man, still suffering from the headache and some residual weakness, was unable to stop the Synthetic Man, who overpowered him.

The Synthetic Man was 10' tall and possessed Class 25 Strength. It could alter its body from rock hard to a pliable form able to deform with any impact. It could also fire a concussive force blast from the jewel in its head band. There's no reason to believe it would be destroyed by sea water, so it may still be wandering around at the bottom of the Gulf of Mexico.

The Sorcerer II should not be confused with:

A minor point of interest: I think this story came out when comic books couldn't have the word "voodoo" in them: The Sorcerer used a juju doll.