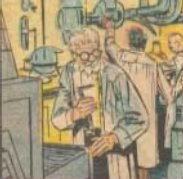 Professor Newton is a high-ranking scientist at a "defense installation at the edge of town" that houses a file containing half of some missile defense plans. The other half of the plans is kept at the Lark Building in Manhattan. Owing to his distinctive white hair, equally white beard, and black-rimmed spectacles, Professor Newton is particularly easy to impersonate which may be why the Chameleon chose him as his patsy from among his fellow scientists. The master of disguise assumed the guise of Professor Newton, which allowed him to steal half of the missile plans. It is unclear what the Chameleon did to the Professor in order to assume his identity but Newton is most likely alive and well. It is further assumed that Newton was not held responsible for the Chameleon's theft and wasn't tossed out of the installation on his rear. Presumably the Professor is still hard at work somewhere for the government.