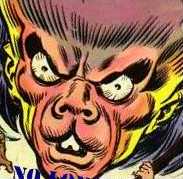 William Turner was born a mutant with an over sized forehead due to the experimental compound opened by the government near town. His mental powers manifested in early infancy and he inadvertently killed his parents: his mother by draining her of her will to live and his father by making him run into the street. Sent to an orphanage, he was often teased and beat up because of his appearance, until he learned to use his powers to control the minds of his tormentors. While he felt an odd sense of guilt for his parents deaths, he felt no shame in wiping a bullies mind clean. Nonetheless, he took up building up his physical might, exercising until he was almost super humanly strong.

Moving himself into an abandoned shack in Queens, William began to feed off the emotions of the residents of the nearby apartment building, including Flash Thompson. When Peter Parker briefly moved in with Flash after his previous apartment was destroyed, his unique mental presence alarmed Mindworm, who that night called on all the sleeping residents of the building to come to him. Spider-Man, able to resist, fought the Mindworm, who wanted to possess Spidey's immense emotional energy. While the others had become used to Mindworm's emotional drainings, Peter was still new to it and able to resist. Spidey boxed him in the ears, damaging his hearing enough so that he could no longer "hear" the emotions of others and control them. In torment over the loss his powers and the sense of loneliness he had from the people leaving him, he was taken to a psychiatric hospital.

Some time later at the hospital, Mindworm turned his power in on himself and used his own mind to fix itself. Revitalized, he planned to take revenge against Spider-Man. Before he could, however he had a dream where he fought Spider-Man and was forced to realize that his guilt over his parents death was the real cause of emotional pain. The dream was intense enough that it was shared by Peter Parker who, upon awaking, confronted the Mindworm as Spider-Man. The Mindworm assured Spider-Man that he was through with his evil ways, that indeed - he had learned that with great power comes great responsibility.

However, years later, Mindworm had still not been able to get his life on track, and existed as a drunk vagrant whose powers were subconsciously negatively affecting the area around him. Spider-Man found him in this state, and mused for a week on what to do about Mindworm. When Spider-Man returned to take him to a doctor, however, the former villain was killed by street thugs.