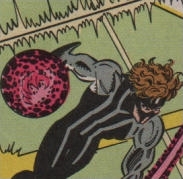 Jeff Wilde was the son of Anton Mogart, the Midnight Man, a villain from the original Moon Knight series during the 1980's. The 'Midnight Man', so called because he "always struck at midnight", debuted in Moon Knight #3 and was a formidable villain during the series first run.

Oddly enough, Jeff Wilde would eventually become Moon Knight's partner. During the third, and most successful, Moon Knight series, Jeff partnered with the hero through several issues and took the name Midnight (Moon Knight #19- 21). While training his new sidekick, Moon Knight was targeted by the Secret Empire. In an attempt to eliminate Moon Knight for past confrontations with the criminal organization, the Secret Empire crippled Midnight with an energy blast. Moon Knight would leave the fight with the assumption that Midnight had been killed by the blast and there was nothing left of him.

Moon Knight believed his new partner was dead, but he was in fact left alive in the clutches of the Secret Empire. Although horribly maimed and disfigured, Jeff survived and was experimented on by the Empire.