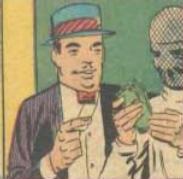 Maxie Shiffman is a struggling agent who just happens to be in the crowd at the Olympic arena the day that a masked Peter Parker goes into the ring to defeat Crusher Hogan to win $100. Max approaches Peter, puts his arm around him, and claims to be a TV producer. He gives his card to Peter and promises to make him a fortune. Now decked out in his Spider-Man costume, Peter contacts Maxie at A-1 Talent Agency and is soon wowing the public on TV variety shows. (In fact, he puts on such a big show that Maxie calls out to him from the wings, begging him to "Leave 'em beggin' for more!")

One night after a fight with Crusher Hogan, Spider-Man fails to stop a burglar chased by a security guard. Maxie happens to be passing the Acme Warehouse in a limo at the time that his client decides to play super-hero and capture "the crook who killed the old man earlier that night". He calls his contacts with the Daily Bugle, hoping this will boost business. But after the event at the warehouse, Spider-Man doesn't show up at the office and creditors start lining up at Maxie's door. As Spider-Man makes the transition from TV personality to super-hero, Maxie tries to track him down to get his meal ticket back. When the two finally meet, Spidey announces that he has responsibilities and turns down Maxie's offer.

Things get worse. Grace, Maxie's secretary, quits since she hasn't been paid in weeks. Maxie's bookie threatens to break his legs. Then a costumed character named Supercharger enters Maxie's office looking for an agent. When Spider-Man decides to earn some extra money after all, Maxie thinks he has died and gone to heaven. He arranges for both of his super-powered clients to appear on the TV show, "It's Amazing!" (Spidey's surprise appearance bumps astronaut John Jameson from the show which pleases his dad, J. Jonah Jameson, not at all.) But Supercharger turns out to be tormented and slightly nuts with a plan to kill everyone in the audience. Spider-Man steps in and defeats Supercharger, then convinces Maxie to return the money he earned from the show even though Maxie desperately needs it.

After a few more shows, Maxie finally gets around to paying Spider-Man but tells him he must pay by check. The wall-crawler insists on having the check made out to "Spider-Man" which backfires when he has no ID in that name to cash the check. (Maxie should have been savvy enough to make it out to "Cash".) It all becomes moot soon after. J. Jonah Jameson writes an editorial on the Spider-Man menace and, just like that, there is no longer a demand for the wall- crawler on television. Maxie tells Spidey that "There'll be no show tonight or any night!" and the two go their separate ways.

Maxie uses his time with Spidey to open doors on the west coast and he becomes what he originally claimed to be: a producer.

Sometime later, Spider-Man finds himself battling Galactus, only to learn he's on a movie set. Maxie and his wife Trudy are there as his agents and they remind Spidey that they set him up as a corporation to get around the check cashing problem. Now, the web-slinger learns, he is a movie star. But the whole thing turns out to be an illusion created by Mysterio. Only Maxie is real and he has agreed to go along with Mysterio because he lost his wife Trudy to cancer the year before and Mysterio has promised to re-create her. Max is willing to live in a dream to keep his wife but when Spidey defeats Mysterio, Max is forced to accept the world and his life without her.