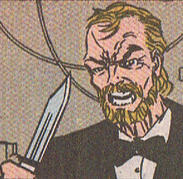 When Peter and Mary Jane met Jonathan Caesar, the owner of their Bedford Towers apartment building, he seemed like a nice if overly attentive neighbor. If Peter brought MJ a rose, Jonathan brought a bouquet. When they came home from Los Angeles, he was the first to greet them. Peter let it go, until he returned from Chicago (where he had been promoting his book of Spider-Man photos, "Webs", and faced the Chameleon) to find his wife missing.

While Spider-Man tore apart the lower parts of New York looking for his wife, MJ was being held by Caesar, who planned on marrying her. Ironically, Mary Jane was still in Bedford Towers, in a specially made room to keep her from escaping. Upon hearing that Spidey was looking for MJ, Caesar hired the mercenaries Styx and Stone.

Far from a helpless damsel in distress, MJ knocked Caesar over the head with a lamp and shocked his goons with the electrical wires. She grabbed one of the guns and drove away Stone and Styx as he was about to kill Spidey with his deadly touch.

Caesar was sentenced to a minimum security prison in upstate New York and was able to have the Parkers evicted from his building. They briefly lived with Aunt May before moving into a Soho apartment owned by Harry Osborn. The newfound peace didn't last, as Caesar used his influence to end MJ's modeling career and rubbed it in by sending her flowers and an ice sculpture.

He was soon released from jail and had Styx and Stone back to hunting Spidey. His spider sense kept them from following him, so they followed Venom, knowing that the two would eventually clash. They eventually caught up with the two and in the following battle, Stone was defeated and Styx was in such rapture from "killing" Venom that he didn't bother resisting arrest.

Caesar continued to plan for his future life with Mary Jane, without his hired muscle. He set a trap by visiting her injured boss and director of the soap opera "Secret Hospital" and forced him to sign a note telling MJ to meet him at the studio. He killed Harold McGee, her boss, after he signed the note.

She was surprised to find Caesar at the studio, who informed her that they were headed for his island in the Caribbean. They were confronted by a police department file clerk who posed as a police officer, who shot Caesar dead. "Detective Goldman" followed MJ after her kidnapping file crossed his desk and decided that she needed protection. Another obsessed fan, he was the one that injured Harold McGee after he shouted at Mary Jane, ran over an old woman that slapped her and tried to drop masonry on Peter after they had an argument.

Mary Jane was no more interested in Goldman than in Caesar. He shrugged and said, "Well, I'll always have re-runs." She saved herself from being shot by telling Goldman that she would tell him the future episodes on "Secret Hospital." She leaned in to whisper and then sprayed him with hair spray and knocked him out with her purse.