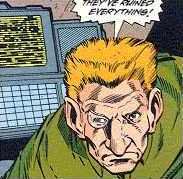 Reynard Slinker, known as the Fox for his slyness and his somewhat vulpine facial features, was a master of disguise and a successful art thief with his own henchmen and underground hideouts all over Manhattan when he made the mistake of concocting a plan to steal a Da Vinci painting and pinning the blame on Spider-Man. The plan succeeded too well; the framing of Spider-Man resulted in the web-slinger teaming up with the Human Torch and getting on the trail of the real thief. Jilting his henchmen, the Fox disguised himself as a Central Park vendor ("See the Moon and Planets, Ten Cents.") but he panicked when approached by Spider-Man and the Torch and gave himself away.

Finally released after years in prison, the Fox discovers that his time in jail has destroyed the respect he earned among his peers. With increased museum security provided by new technologies, the Fox learns he can no longer keep up. Bitter, he plans revenge on Spider-Man and the Human Torch for ruining his livelihood.

He begins by framing the Torch for a warehouse fire, and then lures the two heroes to his old hideout under the subway tracks. Once the heroes arrive, the Fox renders them unconscious and imprisons them in a supposedly escape-proof plexiglass cage. But, again, Reynard underestimates his opponents. Spidey and the Torch smash their way to freedom, and easily defeat the "dim-witted thugs" the Fox has employed, quipping all the way. The Fox is collared in an almost identical scene as the first time. Previously, Spidey and the Torch's smart remarks caused the Fox to say, "C'mon, lock me up so I can stop listenin' to you two nuts!" This time, the quips force the Fox to say, "Enough! Even prison is better than you two!"

The Fox is still incarcerated.