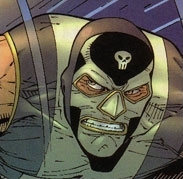 Following in family tradition, Juan Carlos Estrada Sanchez was offered up in combat by his farther to the mysterious wrestling god known as 'The Gilded One', to fight to retain the mask of El Muerto and the power it wields. Just as his father Marcus Estrada- the current owner of the mask of El Muerto had previously done so and his father before him. Juan Carlos had been trained and prepared his whole life for this moment, and when the time came he reluctantly stepped up but would not fight. Upon this refusal, The Gilded One resolved the life of Juan Carlos was forfeit. Before his life could be claimed however, Marcus Estrada leapt to his son's defence but was decapitated. The Gilded one then told Juan Carlos of his revised plan. Juan would have ten years to train, travel and hone his skills as a wrestler. At the end of this period Juan would have to face and defeat a masked hero. As the Gilded One put it- 'A true champion of the people and defeat, humiliate and unmask him'. Should Juan Carlos manage this, his cowardice would be forgotten and he would permanently inherit the mask of El Muerto. If he failed this test, he would meet with the same end as his father.

One night recently at J Jonah Jameson's home, Jonah and son John Jameson where being held hostage, tied to chairs by a man who blamed Jonah for the execution of his father. He had been executed by the state after he shot a police officer, the young man believed Jameson's editorials saying he should not be pardoned had sealed his fate with the justice system. Just as things were looking a little desperate El Muerto smashed through Jonah's front window, saving the Jameson's and incapacitating the man holding them hostage. Juan Carlos explained he was a third generation Mexican wrestler and had been watching Jonah for a period of time, trying decipher what would be the best way to ask a favour of him. Upon seeing the Jameson's in trouble he realised now would be the best time. In turn Jonah granted Juan Carlos his request and engineered a charity wrestling match between El Muerto and Spider-Man. Jonah achieved this end by challenging Spider-Man to take on El Muerto in the Daily Bugle, w/ Jonah putting up four million dollars prize money for charity.

Inside the ring El Muerto was giving Spider-Man quite a workout with his strength and perseverance forcing the wallcrawler onto the back foot a few times. During a struggle were upon El Muerto was about to remove SM's mask, Spider-Man's stingers shot out involuntarily from his wrists and pierced El Muerto's thighs injecting a poison. Juan Carlos dropped to the canvas unconscious and the bout was called off. As this happened the Gilded One had been nestled in the rafters and was witness to Juan Carlos' defeat. Spider-Man dropped El Muerto off at the hospital and later in emergency he awoke to find Robbie Robertson and JJJ hovering by his bed condemning the web slingers actions. Just as Juan Carlos had feared, El Dorado (The Gilded One) then showed by his bed brandishing two swords ready to collect his debt. Following this Spider-Man crashed through the nearest window and proceeded to engage El Dorado in combat as Robbie and JJJ made a quick escape.

Initially El Dorado mistakenly assumed that El Muerto was offering Spider-Man up to him, and in accordance with this he decided that he would not kill El Muerto after all. During the fight El Dorado slammed Spider-Man into the ceiling a few times before he snuck off to the hospital lab and began to mix up a formula in some test tubes. Soon El Dorado arrived in the lab, and just as he discovered where Spider-Man was hiding, El Muerto showed and attacked El Dorado. This gave Spider-Man enough time to finish mixing up his test tube of 'Aqua Regia'- a cocktail of acids that can eat through certain metals inc- Platinum Gold, of which El Dorado's costume was composite. After a dousing with the acid Spider-Man then wrapped it up by dishing out a few quick punches to El Dorado. Thus it appears Juan Carlos got to keep the mask of El Muerto, at least for the time being.