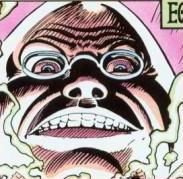 Professor Elihas Starr, known as Egghead, is called in front of the U.S. Government Atomic Energy Board and charged with selling atomic secrets to foreign interests. He sneers at the charges and angers the Board enough so that they fire him from his government work. The New York mobs find out about this and hire Egghead to defeat the Ant-Man. Egghead invents a machine to talk with the ants and promises to free them from Ant-Man's rule if they will betray the super-hero. The plan fails because the ants consider themselves partners with Ant-Man rather than slaves. Although Egghead escapes when the plan backfires, he must hide away in a "dingy Bowery flophouse" to evade the wrath of the mob. He spends his time muttering about ants, making the other residents think he is "just some worthless bum without a brain in his head".

Months later at the flophouse, Egghead meets two thugs named Ape and Twister who have also faced the Ant-Man. The three men agree to team up. By this time, Ant-Man has formed a partnership with the Wasp. Egghead decides that the way to beat Ant-Man is to kidnap the Wasp. The trio set up a laboratory in an abandoned building. Then, Egghead wears a false beard and assumes the role of Prof. Carl Striker, Zoologist. He gives lectures, developing a reputation until he gets invited to build an exhibit about wasps at the City Zoo, which is intended to attract the Wasp herself. In the meantime, the threesome robs a diamond cutter's building using a sleeping-gas gun, an electronic dewelding gun and an insect message interceptor. The scheme is much too convoluted to bother with but Egghead does manage to capture the Wasp and use her as bait for Ant-Man who he tries to defeat using an iguana and an anteater. The plan fails. Ape and Twister are captured but Egghead escapes.

For his next caper, Egghead goes back to using his machine that can talk to the ants. He broadcasts a false report that Spider-Man is looking to attack Henry Pym, who is now Giant-Man. Once Giant-Man and the Wasp get involved in a big fight with Spider-Man on the East Side, drawing all the police to the area, Egghead and his underworld henchmen rob a payroll truck on the West Side. Eventually, the three heroes get wise to the scheme, track down the crooks, and knock the stuffing out of them. Egghead is finally captured.

Sometime later, Egghead breaks jail and hides out in an emergency lab in the sewers. He covers a store manikin in a clay-like substance, and then subjects the figure to his ultra-beta ray. This makes the manikin grow as big as Giant-Man. Then he subjects himself to the ray, which gives him the power to mentally control his Android. Then, by wearing his beta-ray mental energy transmitter, he can see and hear everything the Android does. Big deal. Giant-Man and the Wasp win again. The Android walks off the end of a pier and Egghead is on the run from the law again.

In a 1990s retcon, it is revealed that Egghead first forms his Emissaries of Evil (composed of the Eel, the Rhino, the Porcupine, Solarr, the Swordsman, andPower Man I) to help him threaten New York City with a nuclear missile from the wilds of Canada. In their first mission, Wolverine and Alpha Flight put a stop to it.

Egghead now teams up with the Puppet Master and the Mad Thinker. The Black Widow, spying for SHIELD, stumbles on the threesome. She is saved from Egghead's latest giant Android by Hawkeye, who has taken Hank Pym's growth serum and become Goliath II. Meanwhile, the three mad geniuses concoct a plan that involves an orbiting space station with a powerful death ray. The Mad Thinker sics the Golden-Age sidekick Toro, brainwashed to think he's the original Human Torch, on the Sub-Mariner while the Puppet Master sics Iron Man on the original Marvel Universe Captain Marvel. Why? What difference does it make? They fail. Egghead, meanwhile, uses the death ray to destroy a small midwestern city, and then promises more attacks if the United States isn't turned over to him. The Avengers are itching to attack, but the space station is screened and the heroes don't know its location. Enter Barney Barton, a mob boss. He has been offered a cut by Egghead and was nearly killed by one of Egghead's robots when he refused the offer. Along the way, he learns the location of the space station and reports it to the Avengers. In the attack on the station, Barney Barton sacrifices his life to stop Egghead. It is only then that we learn that Barney Barton is the brother of Hawkeye/Goliath II (Clint Barton).

Egghead flees his space station and develops an annoying propensity to quote Shakespeare. He contacts the Swordsman and hires him to capture Goliath. Swordsman does so but Egghead is angered when he discovers that the Goliath brought to him is not Henry Pym but rather Clint Barton. The two crooks have a falling-out and Goliath II captures both of them.

Later, Henry Pym assumes his Ant-Man identity again and winds up stuck at a height of six inches. Making his way through a garbage dump, Pym just happens to stumble on Egghead physically harassing a young woman. The woman turns out to be Egghead's niece Trixie Starr and she is resisting because her Uncle wants to subject her to his "hypno-kon", a machine that draws power from brainwaves even as it mind wipes its victim. Ant-Man manages to cross enough wires so that the machine blows up. Egghead appears to be killed in the explosion.

Trixie goes on to become a model, using the name Trish Starr and dating millionaire Kyle Richmond (Nighthawk). Both are in Kyle's car when a bomb goes off, sending them to the hospital. Kyle recovers completely but Trish loses her left arm. Yellowjacket (Hank Pym) hears of it and is certain Egghead is responsible. He tracks his archenemy back to the Bowery. Egghead admits to planting the bomb as revenge for Trish helping Ant-Man. Yellowjacket flattens him with a punch and sends for the police.

After a year in prison, Egghead assembles the New Emissaries of Evil (Solarr and the Rhino) and has some scheme that involves a mystical ruby called the Star of Capistan. To further this scheme, he revives the Cobalt Man and sets him against the Defenders. Things get really complicated after that. Let's just say that the Cobalt Man shakes free of Egghead's control and ignites in a contained nuclear implosion that destroys them both.

But not so fast. When Hank Pym falls on hard times, Egghead tracks him down. (Imploded? What do you mean, imploded? Well, it turns out that Egghead teleported to safety just before the implosion took place.) He tells Hank he is filled with remorse over causing Trish to lose her arm and convinces Hank to accept a cybernetic arm to give to Trish. But when Trish puts it on, Egghead uses it to take over her body. He threatens to kill Trish unless Pym helps him steal adamantium from the Strategic Air Command. When the Avengers stop the theft and remove the cybernetic arm, Trish only remembers that Yellowjacket forced her into the crime. Hank tries to tell everyone it was Egghead but everyone knows that Egghead was imploded so Hank Pym is arrested and jailed.

With Hank in jail, a bored Egghead forms the New Masters of Evil, consisting of Whirlwind, Moonstone, the Scorpion, and Tiger Shark. This group goes off half-cocked and gets beaten by the Avengers.

The group re-forms in time for Yellowjacket's trial, adding the Beetle, the Shocker, and the Radio-Active Man to its ranks. As the trial begins, the Masters of Evil break in and abduct Pym, making it appear that they are doing his bidding. The Shocker is brainwashed to believe Hank is in charge and is left behind on purpose so that he can take a lie detector test that "proves" Yellowjacket is a villain. Faced with this prospect, Hank is forced to agree to join the Masters of Evil. But the Avengers are suspicious. When they put a scanner helmet on the head of the captured Shocker, he remembers everything and tells them that the real mastermind is Egghead. But meanwhile, Hank Pym is fighting back. Under the guise of creating a longevity machine for Egghead, he really puts together a weapon that knocks out most of the Masters of Evil. Then, as the Avengers arrive, he punches Egghead in the jaw and knocks him to the ground. But as Hank turns away, Egghead pulls a fancy gun out and points it at his back. Hawkeye arrives at just that moment and shoots an arrow into the barrel of the gun just as Egghead fires it. The result is a backlash explosion that seems to really kill Egghead for good this time.