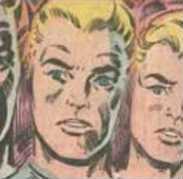 Drom is a freak of time. Minutes after he was born, for unexplained reasons, his infant body was swapped in time with the elderly body he would eventually have. From that point on, he has lived in reverse, getting steadily younger instead of aging, speaking backwards, requiring machines to make food edible to his reversed metabolism. But he is also some sort of energy vampire who absorbs power from people in hopes of slowing down his progress to infancy.

To this end, he has lived in seclusion for forty-five years and somehow built a whole bunch of nifty weapons and machines designed to keep him in the pink. He makes his mistake when he graduates from siphoning the energy of normal people and going after super-heroes instead. He begins by inducing a battle between Iron Fist and a mugger, during which he absorbs the energy the two combatants put out. When that battle ends too quickly, he causes a battle between Iron Fist and Spider-Man.

Eventually, he must reveal himself by creating a four-armed creature out of sand in a sandbox, then by zapping Spidey with some laser pistol. Spidey ends up in a device intended to break down his cellular structure and feed his life-energy to Drom. But Iron Fist crashes the party and the two heroes clobber Drom by smashing him over the head with his full-length mirror. Unfortunately, Drom's self-image, as represented by the mirror, is the only thing that keeps him real. After the mirror is broken, he quickly regresses to infancy, then to non-existence. And since he never existed, there is nothing to keep him within anyone's memory.