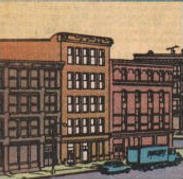 Peter's has lived in various places through his long comic book career. This profile will attempt to catalog the locations and make reference to images whenever possible. It's a work in progress so please bear with us.

The Marvel Encyclopedia (Vol. 4): Spider-Man has a map of Manhattan which indicates the geographic location of many of these places, the lookup reference numbers are provided where available. A revised map is available in Marvel Atlas #2. A very early map was provided in Amazing Spider-Man (Vol. 1) Annual #5 (Story 2).

In order, Peter has called the following places "Home".

UNSORTED: There's a map or photos of an apartment in Web of Spider-Man Annual #3 that is yet to be inserted into here.

Article: This Article
Articles: All Locations